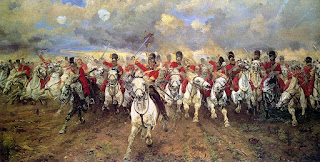 I have just posted a new story entitled Scotland Forever. It was inspired by Lady Butler’s painting of the same name depicting the charge of the Royal Scots Greys at the Battle of Waterloo. A print does indeed hang in the beautiful art nouveau dining room of the Rose Hotel in Bunbury. And the Kansas City T-bone is the speciality of the house. I have enjoyed one on a number of occasions and taken the opportunity to raise a glass to the memory of the Dragoons.

The painting tells only part of the story. Having advanced at the canter, the ground was indeed too broken for a full charge, the Royal Scots Greys routed a French column and captured its Eagle. But their enthusiasm to pursue the enemy left them exposed to a counter charge by the French cavalry which deal them a severe blow in return.

At the Battle of Balaclava, in the Crimean War, the tragic Charge of the Light Brigade is, as a result of Tennyson’s poem, remembered by all former British schoolboys of a certain age. By contrast the highly successful action by the Heavy Brigade, including the Royal Scots Greys, earlier the same day is largely unknown, expect to historians.

At the Yalta conference in 1945 the Soviet hosts were bemused by the contingent of British Army officers taking time off from the negotiations to make a tour of the nearby Balaclava battlefield. The scale and horror of the battles the Soviets had endured to dislodge the Nazis from the Crimea and the rest of western Russia had almost erased their memory of the British and French seizure of Sevastopol 90 years before. One is tempted to imagine Field Marshall Brooke reciting Half a League, Half a League, Half a League, Half a League onward, as he strolled around the “valley of death.”

It was Sergeant Steiner, as played by James Coburn, in Sam Peckinpah's Cross of Iron who offered to show a medal hungry Prussian officer “where the Iron Crosses grow”.

Where the Iron Crosses Grow is also the title of Robert Forczyk’s compelling history of the awful fighting in the Crimea between its invasion by the Nazis in 1941 and their final expulsion by the Soviets in 1944. Given the long and bloody history of Russian possession of the Crimean peninsula one does wonder what possible advantage Khrushchev saw in ceding it to the Ukraine other than, perhaps, as his daughter recalled, making “a personal gesture towards his favourite republic.”