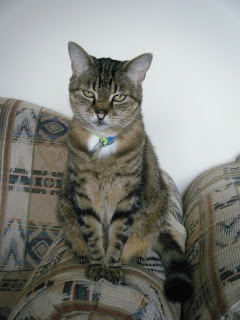 I have just posted a new short story about a melancholy tortoiseshell cat called Jeremiah.

Its just a bit of fun and, for the record, I don't have, or ever have had, a cat called Jeremiah and would never consider such drastic action as is suggested in the story.

Our family has been owned by a number of cats over the years. Some have had sunnier dispositions than others, but none that I would describe as melancholy.

We only have a dog at the moment. A five year old Beagle with a hyperactive sense of smell, interesting views on what should be considered edible, selective deafness and flatulence. Perhaps there's material for a story there.