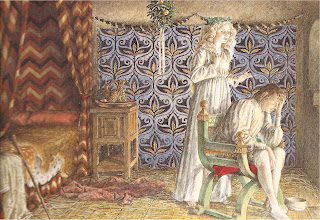 My latest story When Olwyn Met Gawain started life as a back-story sketch about the earlier life of the protagonist in my embryonic novel about a hard bitten tramp steamer captain and the ageing ship he pilots around the pirate, storm and reef threatened waters of the western Pacific in the lead up to the Second World War.

The original draft was in the third person and from the protagonist’s (Captain Bill Rowden’s) point of view. Rowden is broke and unemployed in Barry in South Wales when a working girl he encounters in a dingy dockside pub tries her luck. As an exercise I re-wrote the story in the first person from the woman’s point of view. As I wrote, the story of an exotic temptress, an unwitting knight errant and the petty crook he has to confront, reminded me of the tale of Sir Gawain and the Green Knight. There is also a Welsh variant in which Gawain (also known as Gwalchmei) participates in a quest to find the beautiful Olwyn. In that tale it is not Gawain who succeeds with Olwyn and perhaps that is what the modern Olwyn had in mind; or perhaps she didn’t know quite as much about medieval mythology as she thought she did.

Having heard Olwyn’s voice I think I can see how her story might develop and how her and her Gawain’s path might cross again amidst the violence and uncertainty of war.