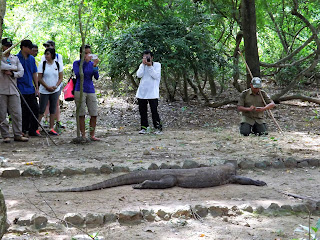 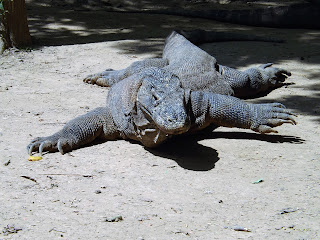 The dragon lay dozing in the sun – right in the middle of our jungle walkway.

Even asleep it looked fearsome, two metres of scaly, grey, prehistoric, muscle power, and the warning of the Komodo National Park ranger was still fresh in my ears. It could sprint at 30 kilometres an hour, and a scratch from its bacteria laden teeth, never mind its bite, was fatal. It would track you while you died an agonising death, your body dissolving from the effect of the toxins. Then rip chunks of flesh off your still warm corpse, and eat up to eighty percent of its own body weight.

Fortunately it only needed to eat once a month.

“How does he know it’s asleep?” asked the ever practical Mrs R. “It could be dead.”

“Do you want me to poke it?” I glanced at the ranger who was pointing with his large fork-ended stave, indicating that we should follow him off the path, and give the sleeping monster a wide berth.

“Don’t be silly,” said Mrs R, warily eyeing the line of fellow cruise passengers following the guide into the undergrowth. “But there could be snakes, or other dragons out there. It might be safer just to tip-toe past.”

As we drew abreast of the dragon the ranger held up his hand and the file halted, like an ageing troop of brightly clothed Chindits on jungle patrol. The leaders crouched, taking aim with their zoom lenses, I was among them, and the buzz of jungle insects was temporarily drowned by the clacking of shutters.

Which roused the dragon from its post – or, more alarmingly, was it pre - prandial slumber, a scaly eyelid rising to reveal the frightening glint of a large coal-black pupil swimming in a jaundiced yellow ring.

Then stubby legs heaved its body clear of the ground, and it waddled along the dusty track, its body arching from side to side, its head swivelling as if in search of its next meal, and its flickering, long forked tongue sensing the air.

Feeling safe behind the illusory security of the zoom lens, I remained crouched and continued snapping, until Mrs R’s toe nudged my backside and I glanced up to see the ranger waving us out of its path. Before straightening up I tightened the laces of my brand-new, Keen walking shoes.

“There’s no point doing that,” said Mrs R, dismissively. “If it’s hungry, you won’t be able to outrun it.”

I smiled knowingly back. “I don’t have to outrun the dragon,” I said with an appraising glance at the more unfit looking of the sweating group of fellow prey. “I only have to outrun one of them.”

Running proved unnecessary, of course. We followed the ranger’s instructions, and further down the track were delighted to observe a pack of five dragons lazing about in a jungle clearing.


Except that it might not have been, “of course,” as a Singaporean tourist discovered the following week, when he got too close to a dragon and was moderately eaten on the leg. He was lucky some islanders were there to save him. I hope his photographs were worth it.