Barry, Past and Present

Barry, South Wales is the setting for the opening chapter of my soon to be published new novel, Oriental Vengeance. Chief Mate Bill Rowden signs aboard an old tramp steamer loaded with coal bound for the furnaces of the Savona steelworks in northern Italy. The year is 1934 and Britain is emerging from the depths of the Great Depression.

In its heyday Barry was the largest coal export port in the world, taking the title from Cardiff in 1913 when it exported over 11 million long tons of coal to the latter’s 10.6 million long tons.

Yet in 1881, only 34 years before, Barry had been an agricultural village with a population of no more than 500. Situated on the northern shore of a tidal estuary, it sat opposite Barry Island, a rocky whale-backed outcrop home to the burial place of Dark Ages Saint Baruc and the ruins of his chapel. Access to the island was on foot across the sand and mud at low tide.

The story of the transformation of a small coastal village into the largest coal export port in the world starts with the Second Marquess of Bute, one of the largest landowners in Glamorganshire, whose estates contained vast coal deposits. To export that coal he developed the port of Cardiff in the 1840s.

By the 1860s Cardiff was reaching the limits of its capacity. Frustrated by the Bute family’s reluctance to expand Cardiff’s facilities, a group of Rhondda valley colliery owners lead by Lord Windsor (who owned land around Barry including Barry Island) and David Davies of the Ocean Coal Company (which supplied coal to the Royal Navy and Cunard) decided to take matters into their own hands. By Act of Parliament in 1884 their Barry Dock & Railway Company was granted approval to build a new coal export port at Barry, eight miles south-west of Cardiff.

On 14 November 1884, Lord Windsor turned the first sod for the construction of Dock Number One, the largest dock in Britain. Coal exports began in July 1889 and by the end of that year exceeded 1 million tons. They rose to 3 million tons the following year.
The construction of a second dock, Dock Number Two, commenced in 1894 and was completed in 1899, by which time Barry was loading over 3,000 ships annually. Exports grew steadily over the next decade peaking in 1913, but declining after the First World War due to the conversion of ships from coal to oil burning and the Depression. Even so, when Bill Rowden signed aboard the Portneath, Barry was still exporting over 5.5 million tons annually. 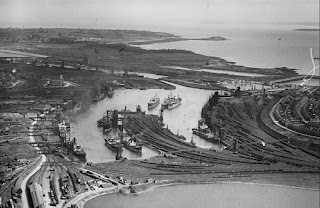 The photograph above shows an aerial view of Barry docks. The vintage of the tramps suggests it was taken in the 1920s or 30s. Most of the coal tips have ships under them. The extent of the rail sidings and the waiting lines of rail wagons can be clearly seen around Dock Number One in the foreground. To the right is the square basin of Dock Number Three and just in front of it is Lady Windsor Lock, which provides access to the Bristol Channel. Stretching away towards the top left is Dock Number Two. The prominent building to the left of Dock Number One is the Barry Docks and Railway Company Building. 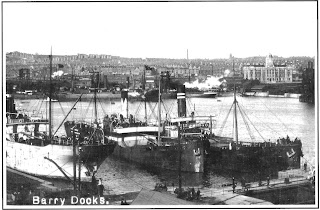 This photograph shows Dock Number One taken from the Barry Island side. The ships in the foreground are very much of the vintage of Portneath. The two on the right appear to be moored at the entrance to the old graving dock. Lady Winsdor Lock is to the right, out of shot. 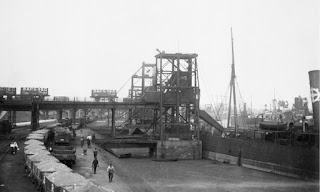 As the photo below shows, the coal was loaded into the ships via elevated rail spurs and coal tips, which tipped the rail wagons and emptied their contents into a chute feeding the ship’s holds. The rail wagons in the photograph above are from the Bargoed colliery north of Caerphilly. Note the thick layer of coal dust on the dock water and the narrow walkway between the dock edge and the rail wagons, which Rowden had to negotiate in the dark. Interestingly, there appear to be two women walking between the rail tracks.

The port has changed considerably since then. Now owned by Associated British Ports, all of the coal tips and most of the railways have been removed. Docks Number Two and Three are both still in service, handling over 300,000 tonnes annually of timber, steel, coal (imported), cement and bulk liquid chemicals. Dock Number One is increasingly surrounded by apartment blocks and a dinghy club uses its waters for recreational sailing.

The photo below shows Dock Number One as it is today. An interesting comparison with the photo above.

The two photos below show Dock Number One looking the other way, and then across to Barry Island on the far side. New apartments are sprouting where the rail tracks ran.

The photo below shows Dock Number Two, taken from Dock View Road overlooking the railway. The dock is surrounded by light industry, there is imported timber on the wharves and a lone tug.

The book opens with Rowden drinking in Culley’s Hotel on Dock View road, which still runs to the north and west of the docks and overlooks them. The picture below shows what the road looked like in the 1920s. Culley’s Hotel is just around the bend. Dock Number One is to the right. The hotel was opened in 1891 by its owner Richard Palethorpe Culley, who also managed the restaurant in the Cardiff Coal Exchange. 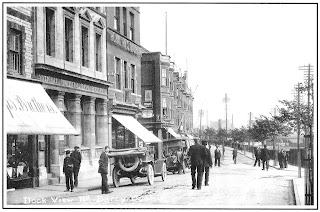 It was a grand looking place as the picture below shows, with several bars and a bowling alley. The Chain Locker was on the lower right-hand side of the main entrance.  It was a favourite haunt of seamen and stevedores until the hotel was demolished in the 1980s. The Chain Locker features extensively in Rogues March, Alexander Cordell’s Rabelaisian novel of the life of artist, raconteur and drunk, James Alexander McAndrew. 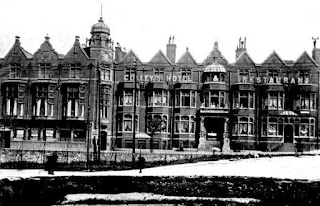 The photo below shows the Chain Locker on the eve of demolition. 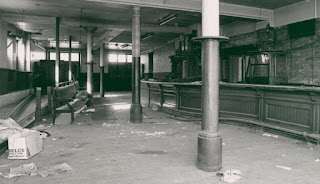 The site is today occupied by a retirement complex. 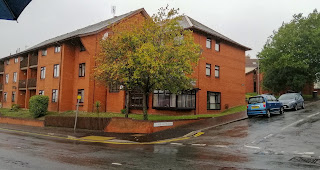 Around the corner in Kingsland Crescent is the alleyway at the end of the red brick wall from which Rhys accosted Rowden and Olwyn. 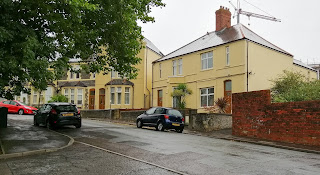 After the fight with Rhys, Rowden walked Olwyn to Holton Road. This is how it looked at the time. 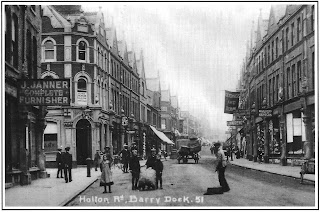 The following morning Rowden left his digs in Thompson Street and walked to the Mercantile Marine Office. The photo below, taken early last century from the rooftop of the Barry Docks Board Building, shows the railway and Barry Town station in the foreground. Dock View Road runs along the top of the rise above the railway and the Mercantile Marine Office is the large grand building top left. At the time of the photo, it was a labour exchange, which explains the crowd of men gathered outside. In the far-left centre, marked by Vim signs is the path leading down under the railway that Rowden walked on his way to join Portneath. 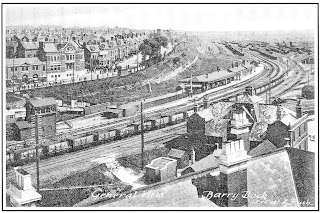 This is how the building looks today 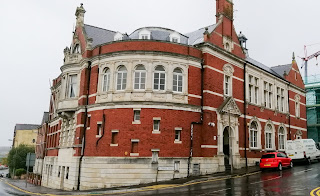 After his interview with Captain Prescott, Rowden walked up Dock View Road to Castleland Street and the Seamen’s Mission. The photo below shows it as it is today, a boutique hotel. 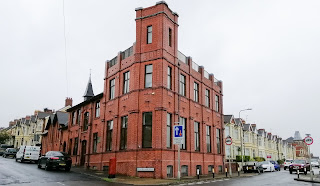 After leaving the Mission, Rowden walked back down Dock View Road to the tunnel under the railway. At the far end, he passed by the Barry Docks Board Building with a statue of David Davies out the front. The building was completed in 1900. It is in Baroque revival style, based on the work of Sir Christopher Wren, which is why it reminds Rowden of St Paul’s cathedral. 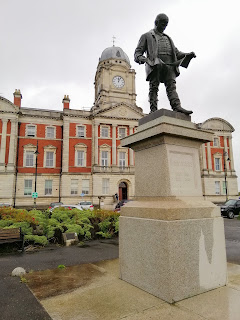 Later in the book Rowden spends a few days in a boarding house in Redbrink Crescent on Barry island. The photo below shows the view from Redbrink Point looking over the old graving dock, Lady Windsor Lock and Dock Number Three. The Barry Docks Board Building is on the far left and Dock Number Two stretches away into the distance.

Even today Barry retains much of its character as a prosperous Victorian-era town, although Barry Island has lost some of its former glamour as a seaside holiday resort. With the coal and the coal tips long gone, the air is clean and fresh off the Bristol Channel. I spent several hours there in September last year, researching locations for Oriental Vengeance and walking in the footsteps of Bill Rowden as he trudged his way beside the dock to join the miserable old Portneath. He might not have liked it, perhaps it brought back too many unpleasant memories, but I did.