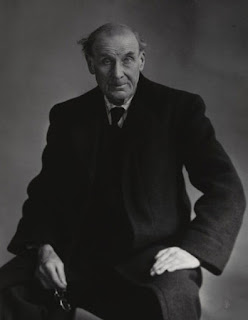 
He looks, to me, more like an ageing bank clerk, or perhaps a world weary salesman waiting patiently for his next appointment.

Winter overcoat casually unbuttoned, a dark three piece suit and tie, perched on a stool as if ready to rise in greeting. One hand braced on a thigh, the other dangling a pair of old fashioned pince-nez.

He looks sober, semi-prosperous, bourgeois and respectable, with a comforting touch of myopia.

It is the hands that first capture the attention though. White against the dark wool. Clean with elegantly long fingers and manicured nails. Reposed, dignified, they appear the hands of a middle class professional, and one can imagine them producing firm copperplate columns of figures, or flicking through wads of brand new 500 Franc notes that still smell of money. One cannot imagine them stained by the nicotine of countless Gauloises, or clasping a glass of pastis while scrutinising the Parisian street walkers.

But it is the face that gives the game away.

The untamed, grey, wispy hair with its suggestion of devilish horns.

The deeply creased brow and the archly curved eyebrows that suggest more than a hint of surprise at finding himself in front of the camera.

The nose is magnificently Gallic, a de Gaulle of a nose. One can imagine it crinkling at the pungent odour of the overflowing drains in the Rue Mouffetard, or flaring with sensual pleasure at the warm, musky scent of a Pigalle effeuilleuse.

Deep creases frame the mouth that curves upward in an ironic grin which, despite the firmly clamped lips, confirms the suspicion this man is not what he seems. That, and the deep-set eyes which gaze directly into the lens, as if challenging Berenice Abbott to swap places.

For the subject is Eugène Atget, a man who has spent a half a lifetime creating a photographic record of fin de siècle Paris. Its Haussmann boulevards and medieval backstreets. Its grand plazas and crumbling palaces. And its inhabitants, mostly the poor, the street sellers and street walkers, the shopkeepers and ragpickers.

And he has not long to live when, in early 1927, Berenice Abbott persuades him to sit before her lens. Several months later, at the age of 70, he is dead.  "I have done little justice to the Great City of Paris" he used to say, and perhaps there is a touch of resigned sadness in the portrait. Which is even more apparent in a second image from the same sitting, which reveals Atget in profile as an aged and hunched man with haunted eyes, gazing towards an unwelcome destination.

He will always be remembers as an urbanist historian, a genuine romanticist, a lover of Paris, a Blazac of the camera, from whose work we can weave a large tapestry of French civilization. - Berenice Abbott. 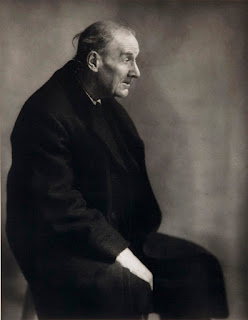