In December 1976, while serving in P&O’s SS Canberra, I took a photograph of the ship anchored next to us off the port of Dakar in West Africa. She was a forlorn and sorry sight, which is not so apparent in the photo as was seeing her in the flesh, or rather the steel. I could not make out her name or port of registry, and the lowered derricks suggested she was under no immediate orders to proceed in to unload.

Over the years I have wondered who and what she was. I was able to answer these questions with the help of Roy Fenton’s ‘Tramp Ships’, his marvellous tribute to those evocative ships of the past. On page 91, I came across the Tureby, a Burmeister & Wain single-decker built in 1936. A few hours on the internet and I was able to establish that the ship I had photographed was a sistership, built at the same yard in 1941. In 1975 she was sailing as Marlin II, owned by Euro-Atlantic de Nav of Panama.

By the time she went to scrap in 1980 she had served for almost 40 years and was one of the last tramp ships still sailing. This is the little I have been able to piece together of her story.

She was a single-decker with an interesting extended midships section, housing the bridge and deck officers forward and the engineers and the engine room aft, with a hold between them. The crew lived astern in the poop. She was equipped with 6 double Samson posts each pair supporting 2 x 3 tonne derrick booms. Each hold was 19 x 6.25 metres (which became important later) and all her deck machinery was electrically powered.

She was launched on 18 September 1941, but to avoid the Nazis getting their hands on her, the yard appears to have deliberately sunk her. In the absence of any definite information I can only conclude that the shipyard ballasted her down sufficiently to rest on the bottom and the refloated her when they were satisfied she was no longer about to be seized.

In any event she was completed as MS Vedby in 1943 and handed over to her Danish owners, A/S Motortramp (A Reinman/Holger Jensen) of Kalvehave (a small town in South Zealand) in May.

As Denmark was under occupation, it was probably inevitable that she was employed assisting the Nazi war effort. From 1941 to 1944 she carried iron ore to Germany from Lulea at the head of the Gulf of Bothnia in northern Sweden. Her last recorded voyage was on 11 September 1944.

The photograph below shows her in ballast in 1959. I believe the photo shows her in Port Huron. Perhaps others will recognise the location. She looks a smart, tidy ship in her Motortramp colours, even if the topside paintwork could do with a touch-up.


Following the end of the war her large holds proved especially valuable and she was very profitably employed shipping locomotives from the USA to France, to replace those lost to Allied bombing during the war. After that, she started a long and eventful life as a tramp ship.

On 18 October 1955, Vedby was in the Pacific Ocean about 60 miles west of California's southern tip, when an explosion occurred in the engine room severely burning the junior engineer. The explosion was probably due to a bearing running hot and igniting the lubricating oil vapour in the crankcase.

Surviving that, Vedby proceeded to British Columbia and in the following year was loading timber when she was boarded by John Donaldson. As he records in his memoir, Long Way from Glasgow, John signed on as an Able Seaman in Vancouver, without the benefit of any seagoing experience. The ship spent the next ten days sailing around the small ports of British Columbia, loading timber at Nanaimo, Port Alberni and Ladysmith. By the time they had finished the timber was stacked 10 feet high above the deck.

From Vancouver, Vedby sailed via the Panama Canal to South Africa, encountering a severe hurricane in the Caribbean which reduced all on board to eating hardtack. After discharging part of her cargo in Cape Town, Vedby sailed up the coast discharging parcels at Port Elizabeth, Durban and Lorenzo Marques. From there she proceeded to Mombasa to load scrap iron for Japan. John Donaldson’s adventures in her ended there, as he got into fight and was arrested. He later stowed away on a Norwegian tanker.

Back in Europe, on 30 January 1959, Vedby collided in fog in the Kiel Canal traveling to Lubeck. Passing the bridge at Rendsburg, an oncoming ship was seen right ahead, which turned out to be the Baltic Express of London. The helm was put over to starboard and then to port, but the Baltic Express struck the port side of Vedby.

After 18 years in the service of A/S Motorship, Vedby was put up for sale at a price of Pounds 150,000. Algot Johansson, the founder of AB Rederi Sally, together with his superintendent Ture Anderson, travelled to Nakskov in Denmark to inspect her. After inspection Johansson offered Pounds 130,000, which was rejected. Johansson announced that he was going to the cinema that evening and would return home to Aland the following morning. The film was bad, but Johansson and Anderson watched until the end. When the film was over, they left the cinema. Outside they found the owner’s agent waiting for them. He accepted Johansson’s offer. Afterwards, Johansson asked Anderson whether he had ever earned so much money by sitting through a bad movie at the cinema.

Algot Johansson was among the famous shipowners of the Aland Islands, at one time owning 25% of all Finnish flag shipping. He named his company Sally after another famous Aland Islander, the writer Sally Salminen.

Another famous Aland Islands shipowner was Gustav Erikson who owned a huge fleet of sailing ships, among them the Flying P’s (Pommern, Passat, Pamir, etc) acquired after World War I from P Laeisz of Hamburg.

Having taken over Vedby, Johansson renamed her Dafny. She was to prove a very profitable ship for Sally, despite her size and moderate speed. According to reports, she was also very popular with her Finnish crews. She was captained for many years by the brothers Hilmer and Jonny Johansson. Her Chief Engineer was Alfons Karlsson, who was succeeded by Edward Dahlblom and later by Bosse Torstensson when Dahlblom became ill in Casablanca and went to hospital.

Dafny continued world-wide tramping, while taking the occasional charter, once again sailing to all parts of the globe.

The photo below is an aerial photo of the Dafny looking well maintained. The long raised midship section is well illustrated, as is the raised poop.

A particularly good charterer was the Danish company, Christensen which had been awarded a contract to deliver pipes from England to Syria. Dafny was chartered to carry them, but unrest broke out in Syria and the Syrians tried to cancel the shipment. The contract had been signed and the freight money paid to Christensen, so Sally still benefited from the deal.

In the autumn of 1966, Dafny loaded timber in Astoria, Oregon for Nagoya in Japan. The voyage took two weeks and the delivery a further week. Just before she was due to leave Nagoya on 7 November, a fire broke out in the aft accommodation block. The reason was probably carelessness in emptying an ashtray into a trash can containing paper. Many of the crew were still ashore and could see on the TV news that Dafny’s stern was on fire. It took six weeks to repair the damage before she finally sailed on 19 December.

That was the only serious accident Dafny suffered during her time with Sally. In June 1967, she was on her way through the Suez Colony, heading north. She became the last Finnish ship to transit the canal before the six-day Arab-Israeli war closed it for many years.

The picture below shows a not quite so well painted Dafny passing through the Kiel Canal. 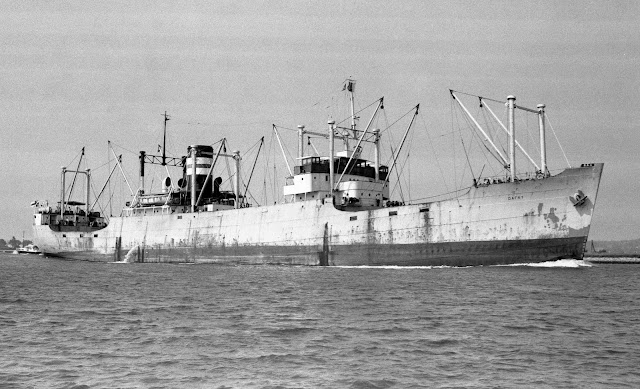 After 12 years of service with Sally, Dafny was sold in August 1974. She was sold for Pounds 1,875,000 to Eckhardt and Co. KG of Hamburg for scrap and was taken over in Santander. Not a bad profit considering Johansson, after his visit to the cinema in Nakskov, had only paid Pounds 130,000 for her. Having taken her over, her new owners discovered that she was still in excellent condition and decided to sell her on for further trading. In 1975 she was sold to Euro-Atlantica de Nav of Panama and left Santander under the name of Marlin II.

The old lady continued sailing for another five years (during which time I photographed her in Dakar) before her fate was sealed for good. She was sold to Spanish shipbreaker Naviera Mogor SA of Marin (in Galicia) and scrapped in November 1980.

Gone – but not forgotten, at least not in the port of Mariehamn, where she was registered for many years. The Alands Shipping and Commerce journal regularly reminds its readers of their islands’ illustrious shipping heritage. Articles on Dafny have appeared as recently as 2008 (1/2008 5 Feb 0 15 April and 2/2008 8 May – 16 June) to which I am indebted for much of the above information. Perhaps I should leave to last word to Algot Johansson himself, who is reported to have said that the only thing wrong with the ship was that she was too small.