Jack Goodall was my grandmother’s youngest and favourite brother. Born in Otley, Yorkshire on 26 October 1896, Jack was the son of leatherworker James Goodall and his wife Frances (nee White).

Otley is almost 60 miles from the sea, about as far away from the coast as it is possible to be in Britain, yet, at the age of 16, Jack enlisted in the Royal Navy.

Said by those who attended it to be the toughest training school for boys in the world, it was where the Royal Navy turned raw recruits into seamen.

Below is a modern photograph of the disused training school, which closed in 1976. In the upper left quarter can be seen the parade ground and the signal mast. The mast was removed from the steam-sail corvette ‘HMS Cordelia’ when she was broken up for scrap in 1904.

One of the most anticipated or feared events for the boys before they successfully completed their training was dressing the mast.

The photo below shows the mast fully dressed, with boys standing on each of the yardarms, clinging to the ratlines, and with one ‘lucky’ ‘button boy’ standing atop the mast cap, 143 feet in the air. He was at least provided with a vertical grip to hold onto.

Moored at the end of the jetty were two ships. ‘HMS Ganges’ and ‘HMS Ganges II.’

‘HMS Ganges’ had formerly been ‘HMS Caroline’, a composite three-masted, screw sloop built at Sheerness in 1882.

‘HMS Ganges II’ had originally been ‘HMS Minotaur’, an ironclad frigate built in 1863. As well as a 7,000 hp trunk steam engine, she also possessed five masts. She had spent most of her career as the flagship of the Channel Fleet and took part in the naval review marking Queen Victoria’s Golden Jubilee in 1887.

The picture below shows Shotley jetty as it appeared in about 1906. The ship to the left is ‘HMS Ganges II’ (ex Minotaur), the one in the centre foreground is ‘HMS Ganges’ (ex Caroline) and on the right is ‘HMS Agincourt’ which was removed in 1910 to become a coal hulk.

The boys would have spent many hours working on the ships, performing most of the duties they would subsequently perform at sea.

On arrival at HMS Ganges, Jack’s rate of pay as a Boy Seaman Class II was the princely sum of nine pounds per annum. On completion of his basic training in April 1913, he was promoted to Boy Seaman Class I entitling him to an additional one pound per annum. On 21 April he was judged ready for sea service and posted to ‘HMS Crescent'.

The ship he joined was an Edgar Class cruiser built in 1892. She was 388 feet long, mounted two 9-inch guns and ten 6-inch guns, and was powered by three triple-expansion steam engines capable of propelling her at a heady speed of 20 knots. She must have been an exciting first ship for a 17-year-old boy from country Yorkshire.

‘HMS Crescent’ was over 20 years old when Jack joined her, having served many years overseas in Australia and Canada. She had recently been recommissioned after a lengthy refit and was attached to the Queenstown (Cobh, Ireland) Training Squadron. Jack served in her until 3 Sept 1913 before being posted to the Portsmouth Naval Depot, ‘HMS Victory’.

A 15,000-ton London Class pre-Dreadnought battleship, built in 1899, ‘HMS Bulwark’ was heavily armoured, mounted four 12-inch guns and twelve 6-inch guns in casemates. She had 20 coal-fired boilers powering two triple-expansion steam engines, capable of propelling her at 18 knots. Her 13-year career had seen her serve in the Mediterranean and Home Fleets. In August 1913 she formed part of the Fifth Battle Squadron, based at Portland, and took part in the annual fleet manoeuvres before returning to Spithead, where she stayed for the remainder of the year.

In May 1914 she began her annual refit which lasted until July, immediately following which she joined the test mobilisation and fleet manoeuvres in response to the assassination of Archduke Ferdinand. War was imminent; Churchill was First Lord of the Admiralty and I expect Jack and his shipmates were caught up in the initial enthusiasm for war. His ship, however, was no longer fit for the line of battle. The launch of ‘HMS Dreadnought’ and her successor battleships had rendered all prior built battleships obsolete.

Nevertheless, when war was declared on 4 August 1914, ‘Bulwark’ and the Fifth Battle Squadron joined the regathered Channel Fleet to defend the English Channel. On 5 August the squadron escorted the ships carrying the British Expeditionary Force to France. They were then ordered to Sheerness in the Thames Estuary to guard against the threat of German invasion.

26 October would have been an exciting day for Jack when he was promoted to Ordinary Seaman, joining the ranks of the adult crew. The promotion brought with it a pay rate of Pounds 22/16s/3d per annum, the equivalent of about 3,034 pounds today. By comparison, my first wage as a cadet in 1970 was 20 pounds per month. Had Jack been over 21, he would have been granted an additional 3d per day under the Churchill reforms of 1912. In exchange for his promotion, Jack took on the hardest, dirtiest, most menial tasks aboard a battleship. The cleaning, chipping, painting, polishing, fetching and carrying necessary to keep the ship in fighting condition. One compensation, upon joining the ranks of the adult seaman, was participating in the rum ration. Junior seamen were issued 2.5 fluid ounces (75 ml) of 95.5 proof navy rum (54.6% ABV) every noon. It was diluted with two parts of water into grog. An Australian standard drink of 40% ABV spirits is 30 ml. Taking into account the higher ABV of navy rum, Jack was consuming about 3.5 standard drinks every noon. In today’s terms, he would fail the breathalyser and be unfit to operate dangerous machinery, of which ‘Bulwark’ abounded.

Thoughts of the noon rum ration were probably a welcome relief to the men on the morning of 26 November. ‘Bulwark’ was moored at number 17 buoy at Kethole Reach, east of Sheerness in the estuary of the River Medway. She was coaling, a dirty job in which all the crew participated. The coal dust penetrated every crack around windows and doors, covering the entire ship in a fine layer and tainting food and water. Taking a break, at 7.50am the crew were eating breakfast when a massive explosion ripped the ship apart.

Aboard ‘HMS Implacable’ moored nearby, witnesses reported that ‘…a huge pillar of black cloud belched upwards... followed by a thunderous roar. Then came a series of lesser detonations, and finally one vast explosion that shook the Implacable from mastheads to keel.’

The explosion shook every building in the vicinity and was heard as far away as Whitstable and Southend. Dense clouds of smoke smothered the Thames estuary. When they cleared, the ship had vanished. Debris was found up to six miles away.

Although enemy action or sabotage were immediately suspected, the truth was far more damning. 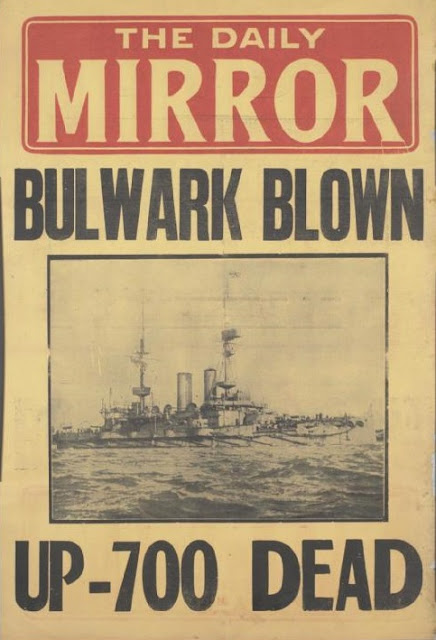 On the afternoon of Thursday, 26 November 1914, Winston Churchill made a statement to the House of Commons.

"I regret to say I have some bad news for the house. The Bulwark battleship, which was lying in Sheerness this morning, blew up at 7.35 o'clock. The Vice and Rear Admiral, who were present, have reported their conviction that it was an internal magazine explosion which rent the ship asunder. There was apparently no upheaval in the water, and the ship had entirely disappeared when the smoke had cleared away. An inquiry will be held tomorrow which may possibly throw more light on the occurrence. The loss of the ship does not sensibly affect the military position, but I regret to say the loss of life is very severe. Only 12 men are saved. All the officers and the rest of the crew, who, I suppose, amounted to between 700 and 800, have perished. I think the House would wish me to express on their behalf the deep sorrow with which the House heard the news, and their sympathy with those who have lost their relatives and friends."

The naval court of enquiry, held at the Royal Naval Hospital, Gillingham, found no evidence of external explosions such as those caused by torpedo or mine. Eyewitnesses reported seeing a flash of flame close to the aft 12-inch gun turret, immediately followed by one or two explosions. Examination of the gunnery log, recovered partially intact, together with testimony from the chief gunner’s clerk, revealed that the magazines for the 6-inch gun ammunition were being restowed. Up to 30 cordite propellant charges had been temporarily stowed in a nearby alleyway against the boiler room bulkhead, and the door to the magazine left open when the crew went for breakfast at 7.45am. Both 12-inch and 6-inch shells were also temporarily stowed in the alleyways. The inquiry concluded that heat from the boilers conducting through the steel eventually ignited the cordite. The blast detonated the shells and flashed into the magazine, causing the catastrophic explosion that blew the ship apart.

Three days after the explosion, naval divers were sent to investigate the wreck. They found only two large sections of the ship. Part of the port bow, as far aft as the sickbay, lay 50 feet east of the mooring. The starboard bow was a further 30 feet away. The rest of the ship had been ripped apart so violently that only fragments could be found. A single 12-inch gun was later located.

In total, the explosion killed 51 officers and 745 men, of whom Jack was one. Only 14 survived, of whom five later died of their wounds. Most of the others were seriously injured. A miraculous exception was Able Seaman Marshall, who was blown out of an open hatch and later described feeling a ‘colossal draft’ as he flew through the air, seeing Bulwark’s masts shaking. 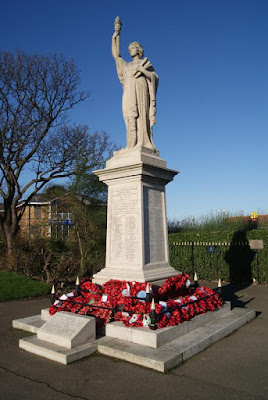 Only 61 bodies were ever recovered. They are buried in Woodlands Cemetery, Gillingham. The mortal remains of the rest, including Jack’s, lie with the wreck. They are commemorated on the Sheerness Memorial and their names are recorded on the Portsmouth Naval Memorial. 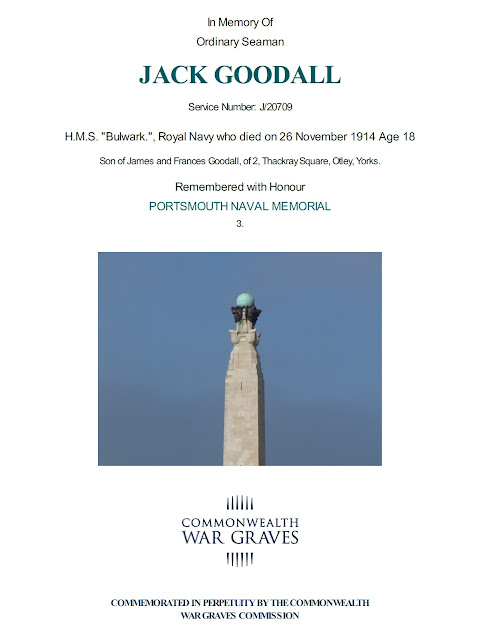 Rest in Peace Great-Uncle Jack, we will remember you.