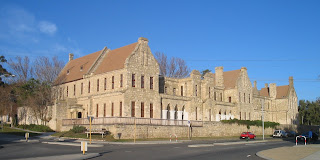 I recently posted a new story entitled Still on Patrol which narrates the ghostly encounter between an aspiring writer and a veteran US Navy submariner.

The setting for the story is the Fremantle Arts Centre, which also features in the story about Jeremiah the cat.

The Fremantle Arts Centre is one of the most interesting buildings in Fremantle and is, indeed, frequently referred to as the most haunted building in Australia. Although Port Arthur or Sarah Island in Tasmania would give it a run for its money.

The Heritage Booklet published by the Fremantle Arts Centre provides a very useful guide to the history of the building which was originally built in 1861 as a lunatic asylum, was transformed into a Women’s Home in 1909 and was taken over by the US Navy as a base for its Fremantle based crews in 1942. Since then it has been a Technical School and a Museum before being finally transformed into the Fremantle Arts Centre in 1973. By the late 1950s the building had fallen into such a state of disrepair that it was threatened with demolition. Fortunately the City of Fremantle, under the leadership of Mayor Sir Frederick Sampson, had the foresight to save it.

Local writer Maya Anderson has researched and documented a number of stories evidencing the buildings reputation for being haunted and I am indebted to her for the episodes described in my story.

I had lived in and near Fremantle for 15 years before I finally visited the Arts Centre, and only then because I had joined the Out of the Asylum (OOTA) Writers’ Group that meets there every Friday. Since then I have visited a number of its exhibitions and activities and enjoyed coffee and lunches in its beautiful, shaded, courtyard café.

I have often thought that the building would be a great source of inspiration for stories with the many characters and incidents associated with it. Moondyne Joe was committed there in 1900 and in 1886 two brothers, Robert and Arthur Bunning, while awaiting a ship to take them back to the old country, submitted a tender for its extension. They won, and stayed in WA to found Bunnings.

The Writers’ Group meets in Room Three on the first floor. A room which very much reminds me of the boarding school dormitory I shared for a year with two dozen other boys. We also meet for lunch and hold poetry and prose readings, and critiquing workshops, in the café. Writing can be a lonely business. Staring at a blank page or a computer screen waiting for inspiration, struggling to eliminate spelling mistakes, grammatical errors and split-infinitives and searching for the right word or phrase that will transform a turgid sentence into crackling prose. Having a group of like-minded individuals to turn to for encouragement, advice and positive criticism is invaluable and uplifting and I heartily recommend it