Messing About In Boats 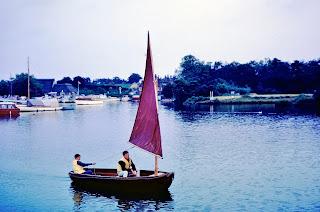 It wasn’t Kenneth Graham’s Ratty that inspired my love of messing about in boats, but Arthur Ransome’s delightful stories of the Walker and Becket children sailing their Swallow and Amazon in the Lake District of England.

As a result of which, my first command was two dining chairs pushed together with a tablecloth tied to a broom handle for a sail, in which I made many imaginary voyages over the Spanish Main. As we lived in the Bahamas at the time, with pirate forts, uninhabited atolls and coral beaches to explore, plus trading schooners plying between the islands with cargoes of bananas, coconuts and turtles, it was not much of a leap of imagination. I so much enjoyed those fantasy voyages that I determined to go to sea. Where there proved to be scope for a great deal of messing about in boats.

You can read the full tale here.