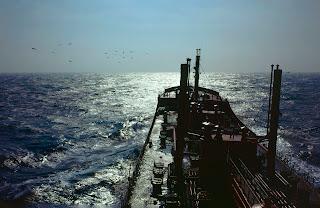 It was a flying version of a pierhead jump. I was on leave waiting for my next appointment, when a phone call from personnel informed me that ‘Post Runner', a Panocean chemical tanker was short of a third mate. As I had previous experience in chemical tankers (I had signed off ‘Post Champion’ the previous November) and I was immediately available I was told to pack my kit and head to the airport where a ticket would be waiting at the BA sales desk.

With the ticket was a letter appointing me as Third Officer Operations, and I settled back in my VC 10 seat to enjoy the flight.

The Immigration Officer was not impressed with me. He asked for the letter of authorisation. I produced my appointment letter. He waved it away in dismissal, called for some backup and hauled me away.

After we had established the basics, that my name was Richard Regan, they could see that from my passport, and I had a letter of appointment to join ‘Post Runner’ in Port Harcourt, the questioning went like this.

‘Where has the ship come from?’

‘What is the captain’s name.’

‘What is she carrying? … Where is she going?’

Like Sgt. Schulz, I knew nothing. No one had bothered to tell me and I had never thought to ask.

By the time they had convinced themselves that I was as harmless (and possibly as frightened) as I appeared, and returned my passport stamped with a warning that I was to leave Nigeria within 48 hours, my connecting flight to Port Harcourt had departed. Judging by the scrum that had already formed around the departure desk for the next one that was still four hours away, I didn’t think I was likely to board that flight either. I pulled out the letter of appointment and studied it hoping for salvation. A previously overlooked detail caught my eye. The name of the agent – Elder Dempster.

The information desk confirmed they had an office at the airport. Half an hour and several phone calls later, I was in a car on my way to Apapa. The ship had not yet sailed for Port Harcourt.

At the port office, my passport was duly stamped to confirm that I was leaving Nigeria and I was allowed aboard.

‘Post Runner’s master at that time was Captain Bob Crump, but if memory serves, he was on leave at the time and a relief captain, whose name escapes me was in command. The Chief Officer Operations was Phil Messenger, 2.0.0 was Eddie whose surname I forget but whose Brazilian wife Cleia was sailing with us, and the cadet who was keeping the 8-12 was called Graham (again I apologise for forgetting his surname). We sailed for Port Harcourt the following afternoon.

I took over the watch at midnight as we rounded the bulge of the Niger Delta. There were dozens of oil drilling structures marked on the chart, but I don’t remember seeing any of them.

The pilot met us at the mouth of the Bonny River and safely conned us up to Part Harcourt where we moored to a midstream boom.

It was a peaceful night as we pumped the last of our cargo ashore until a small boat came alongside. A man climbed up the accommodation ladder, followed by two giggling women. I barred their way. The man was obviously a local pimp attempting to bring prostitutes aboard. I ordered them off.

The man replied in a broad Glaswegian accent that he was the Second Engineer and would I kindly shift my backside out of the way and mind my own business – or words to that effect. A valuable lesson in not jumping to conclusions.

Departing, the pilot saw us clear of the town and summoned the launch alongside, leaving the captain the task of negotiating the river. Keep to the centre and follow the buoys. Piece of cake.

Shortly after leaving, it was decided that freshwater stocks were too low to reach Rotterdam, so we put into Freetown, Sierra Leone to top up. The captain’s night orders read – call me two miles from the anchorage. We had time to spare, I spent it steaming east – west – east along the bearing to Cape Sierra Leone light.

On the way to Rotterdam we also made a brief call into Gravenchon on the Seine, but I have forgotten why.

On arrival in Rotterdam, we were greeted by the sight of thousands of barrels of chemical on the wharf. Almost managing to keep a straight face, the agent told us that we would have to hand pump each one into the ship. He was joking.

Having re-loaded, one of larger parcels being Vinyl Acetate Monomer (VAM), and with Captain Crump back in command, we sailed back to West Africa.

After a brief call at Abidjan in the Ivory Coast, we headed south to Luanda. 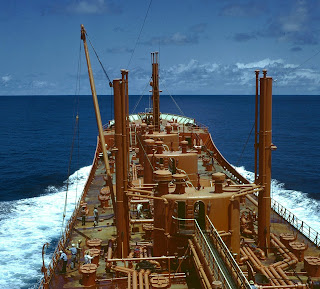 Angola was then only months away from gaining independence from Portugal. I was told to make absolutely sure that we were flying the Portuguese flag upon arrival. On the ship’s first call there on a previous trip, some wise guy had supplied the Frelimo flag, which almost resulted in the captain’s arrest.

As we were anchored right in the entrance of Luanda Bay, there was no opportunity to go ashore to sample the delights of the city and its beaches. Instead, Eddie and I decided to exercise our seamanship skills by sailing a lifeboat. We took along his wife and the two engineer cadets. Good experience for their lifeboat tickets. A moderate nor-westerly was blowing, ideal sailing weather.

As we reached back and forth across the mouth of the bay, the sailing qualities of a BOT lifeboat became painfully obvious. It would not point higher than 60 degrees into the wind and made so much leeway that ground was being lost on every tack. 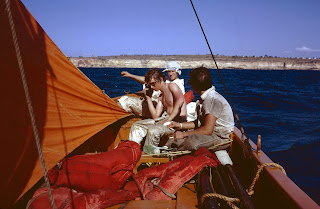 Out came the oars, but four men rowing (with Cleia on the helm) into the wind was never going to be enough to get back to the ship.

Fortunately, the agent’s launch appeared on the daily mail run and gave us a tow back. So much for seamanship lessons. There were a few grinning faces hanging over the rail as we were hoisted back aboard.

From Luanda we sailed to Douala in the Cameroon. We discharged part of the cargo moored alongside dolphins mid-stream in the Wouri River, before going alongside at the city’s wharves. Enormous hardwood logs were being loaded into the ship astern.

The final call was back to Lagos. Most seafarers will remember the Nigerian cement scandal of the mid-1970s, when 22 million tonnes of cement were ordered by various government authorities and up to 250 ships were anchored off the port waiting to unload. Some ships reportedly waited for two years, only to find their holds full of concrete.

As a chemical tanker we had priority, but we still waited several weeks. The anchorage was chaos. Ships as far as the eye could see. During the day Channel 16 was just a maddening cacophony of ships calling the port and each other with no regard for transmission discipline. At night the would-be disc jockeys came out to play. The airwaves were filled with music. Anyone calling Mayday would have had no chance.

Finally allowed to berth, we set to work discharging the rest of the VAM. All was going well until the general alarm went off. One of the motor rooms was on fire.

‘Post Runner’ was an early chemical tanker and although the pump room and the motor room were divided the motors were electrically driven. The VAM was notoriously penetrating. It had eaten through the seal of the pump, worked its way up the driveshaft, and caught fire on the motor bearing. The officer of the watch hit the kill switch, the emergency parties jumped into their breathing apparatus and in minutes the fire was out. We blew the line clean with nitrogen and exhaled sighs of relief.

From ashore came the clanging of a fire engine. Out of the engine streamed the port Fire Brigade, led by their chief in a gleaming helmet. Without waiting for an explanation, he ordered one of his men down into the motor room.

The fire was out, but it was still full of VAM gas. Within seconds the man lay sprawled on the deck plates. The fire chief turned to the next man.

It took valuable seconds to persuade him that this was not a good idea.

As the brigade had none of the right equipment with them, our emergency team evacuated the man.

The immediate result was that we were declared unsafe and sent back out to anchor. After another few days swinging around the pick, we were ordered back to Europe with the remains of the VAM still on board.

My discharge book says I signed off in Rotterdam on 6 May 1975, but I have vague memories of leaving the ship in Shell Haven on the Thames, which was our first port of call.

Whichever it was, I joined ‘Oriana’ four days later, but those are stories for another day.