An After Dinner Tale 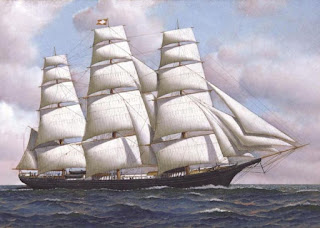 I have just posted a story entitled An After Dinner Tale. It is written – attempted might be a better description - somewhat in the style of Joseph Conrad. Four seafarers sit in a riverside pub on a foggy night in London while one narrates a story of the intertwining of fate. Well it’s actually several stories that he attempts to weave into one in order to examine the workings of fate. The ending is a quotation from Lord Jim, Conrad’s marvellous novel of failure and redemption set in the East.

Joseph Conrad is one of my favourite authors and Lord Jim and Heart of Darkness two of my favourite novels, both featuring his embedded and far from disinterested narrator, Marlow, about whom he wrote: the man Marlow and I came together in the casual manner of those health-resort acquaintances which sometimes ripen into friendships. This one has ripened.

Despite the great gulf between their writing styles Hemingway, another of my favourite authors, was a great admirer of Conrad. When Conrad died Hemingway penned the following tribute. It is fashionable among my friends to disparage (Conrad). It is even necessary …. It is agreed by most of the people I know that Conrad is a bad writer … And now he is dead I wish to God they would have taken some great, acknowledged technician of a literary figure and left him (Conrad) to write his bad stories.


Joseph Conrad was Polish but became a naturalised British subject. He spoke English with a pronounced accent but all of his major published works were written in English and he is generally regarded as one of the greatest novelists to write in that language.