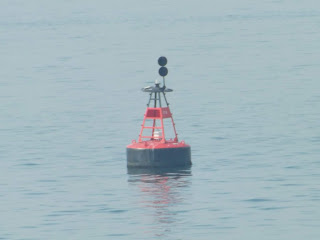 On a recent visit to Penang, our cruise ship berthed at the Georgetown passenger ship terminal, beside Fort Cornwallis.

As we arrived I noticed a red buoy a hundred metres or so east of the berth. My knowledge of navigational buoys being somewhat rusty, I couldn’t recall exactly what the mark signified. Closer examination (having taken a photo with the zoom lens) revealed a buoy with a black body and a red top, on which was mounted a latticework pyramid painted black and red. Atop the pyramid were two vertical black spheres. It took subsequent reference to my old seamanship books, purchased during my oh-so-long-ago cadetship, to confirm that it was an “isolated danger mark.”

But what danger did it signify? As usual, a very good friend of mine, and ex-merchant marine captain knew the answer.

“You obviously don’t know about the Battle of Penang,” he said.

Of course I knew that Penang had been overrun by the Japanese in mid-December 1941, after extensive bombing and the destruction of the Royal Air Force and Royal Australian Air Force squadrons at Butterworth.

Wrong war, was the answer. He then told me the story, which he had learned from his previous visits to Penang, including stays at the famous Eastern & Oriental Hotel. Had I known, I could also have looked it up on Wikipedia.

The Battle of Penang, it transpired, was a naval engagement fought between German, Russian and French ships in Penang harbour on the night of the 28th October 1914. The German ship was the light cruiser Emden under the command of Lt. Commander Karl von Muller. His mission was to raid the harbour and sink any enemy vessels sheltering there. To disguise the three funnelled Emden, von Muller added a fourth dummy funnel which, on superficial inspection, changed her appearance to resemble a Royal Navy Town Class cruiser.  One of that class, HMS Yarmouth, was known to be operating in eastern waters at the time.

Very early on the morning of 28th October, von Muller sailed boldly into the roadstead between Penang and Butterworth. Anchored there he saw the Imperial Russian cruiser Zhemchug, one of the handful of ships to survive the guns of the Japanese Navy at the Battle of the Tsushima Strait in 1905.

She had arrived in Penang for a boiler clean on 26th October. Most of her crew were on shore leave, the remainder had hosted a late night party on board, and her captain, Commander Cherkassov was entertaining a lady friend at the Eastern & Oriental Hotel in nearby Georgetown.

Von Muller approached to within 300 yards of the unsuspecting Zhemchug, ran up his Imperial German Navy battle ensigns, launched a torpedo and opened fire. Although taken completely by surprise the Zhemchug’s crew managed to bring her guns into action, but it was all too late. Von Muller calmly sailed past, turned about and sailed back to launch a second torpedo while his guns continued to hammer away at the Zhemchug. Alerted by the gunfire Commander Cherkassov and his girlfriend could do nothing but watch from the safety of the E&O Hotel. Badly damaged and on fire the Zhemchug finally exploded and sank.

The Eastern & Oriental, now much enlarged and currently undergoing refurbishment, still stands on the western end of the Esplanade. The red “isolated danger” buoy marks the final resting place of the Zhemchug. Her unfortunate captain, Commander Cherkassov, was court-martialled and dismissed from the Imperial Navy.

As for the Emden? Von Muller’s luck ran out 10 days later when he ran into the Australian cruiser HMAS Sydney. Outgunned, von Muller was forced to run her aground and surrender at the Battle of Cocos.